PS: Don't forget to watch our new music videos of our original songs "Hot Rod Hillbillies", "3:10 To Memphis" and "HEY BILL JR!" above!
The Audio was recorded at The Legendary Sun Studio in Memphis, TN!

Back by Popular Demand,

Rafael Espinoza and The Rockabilly Railroad have been invited to return to rock the Fresh by Brookshire's Patio Sat. Oct. 23rd!!!

Family Friendly & plenty of room to social distance on Fresh's large outdoor patio under the stars! 🌠 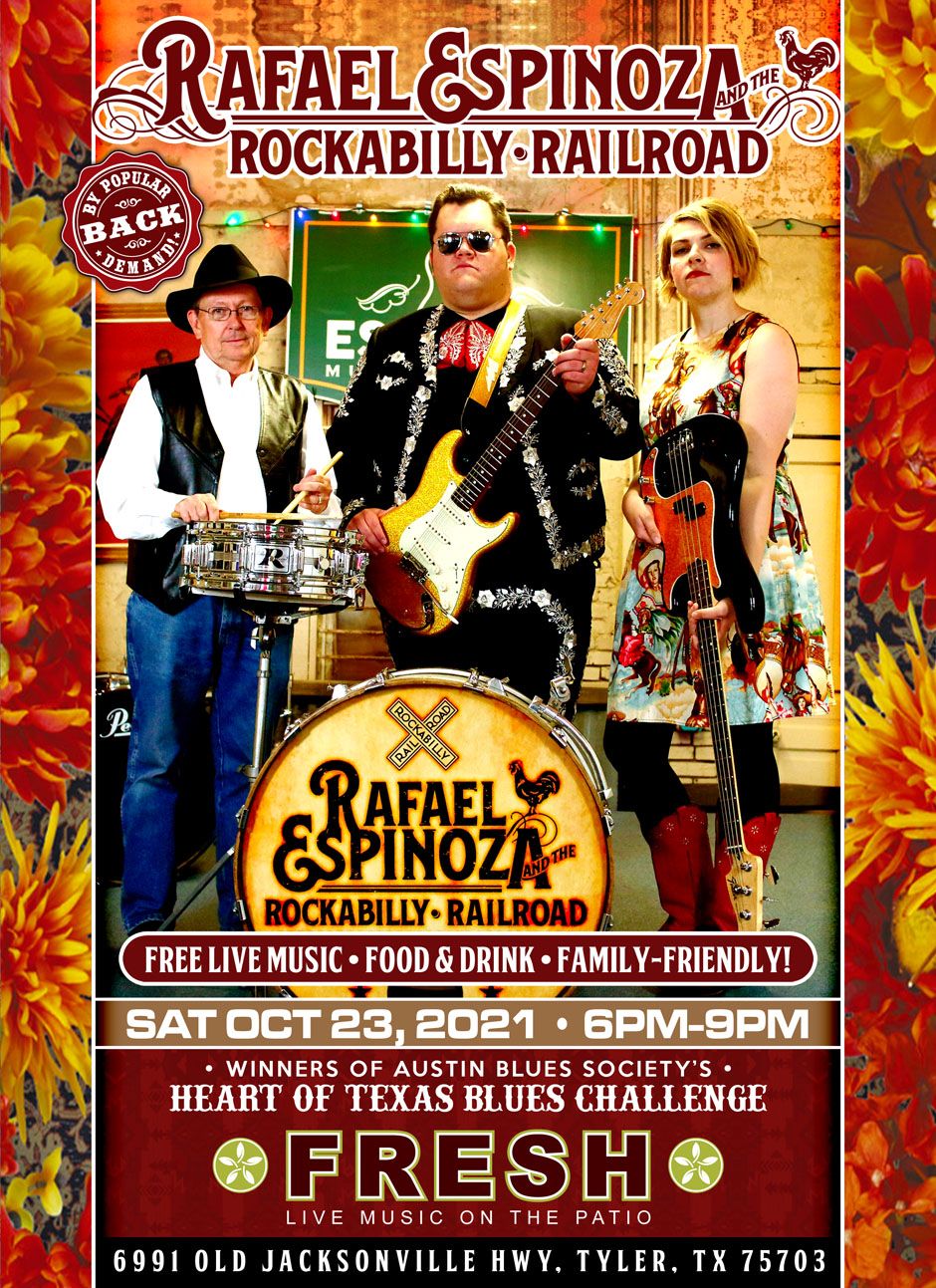 Huge thanks to @shoutoutdfwofficial for featuring our very own Rafael Espinoza in their magazine this month!

Rafael talks all things music, from his own band to teaching at Espinoza Music Academy and building custom guitars!

Check out the full article at https://shoutoutdfw.com/meet-rafael-espinoza-professional-musician-educator/

Special Guest Michael Thompson will be sitting in on keys! 🎹🎶

Family Friendly & plenty of room to social distance on Fresh's large outdoor patio under the stars! 🌠 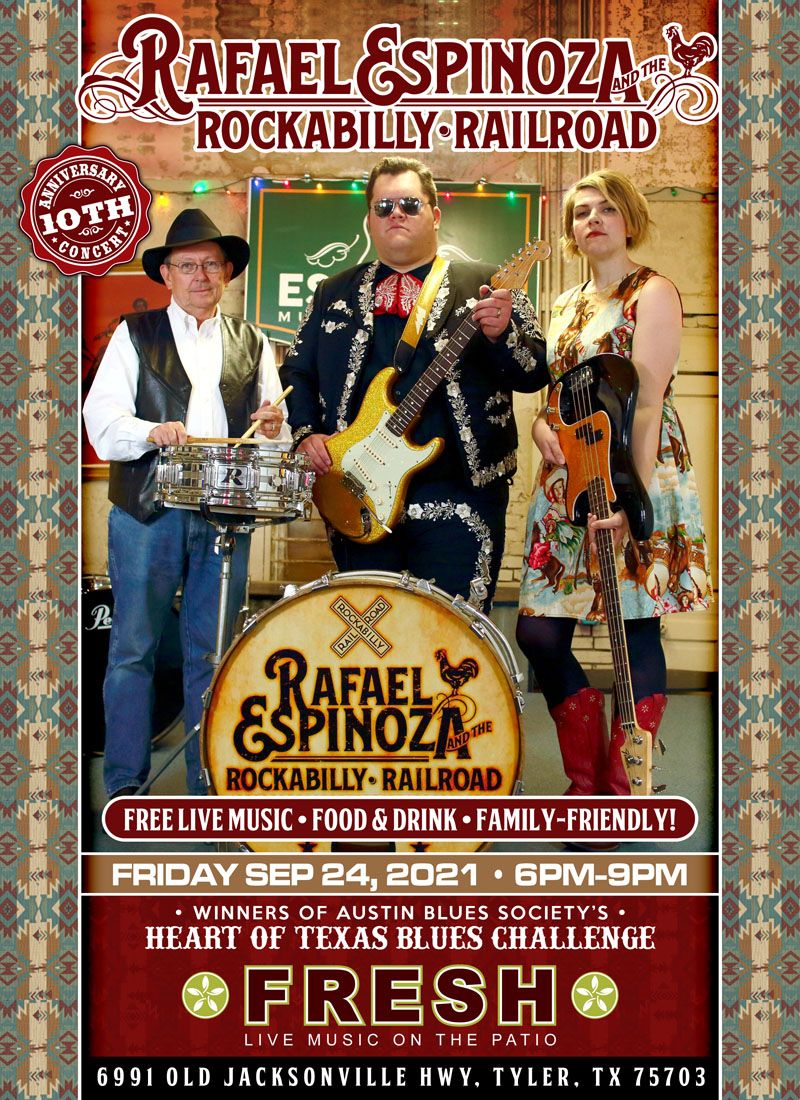 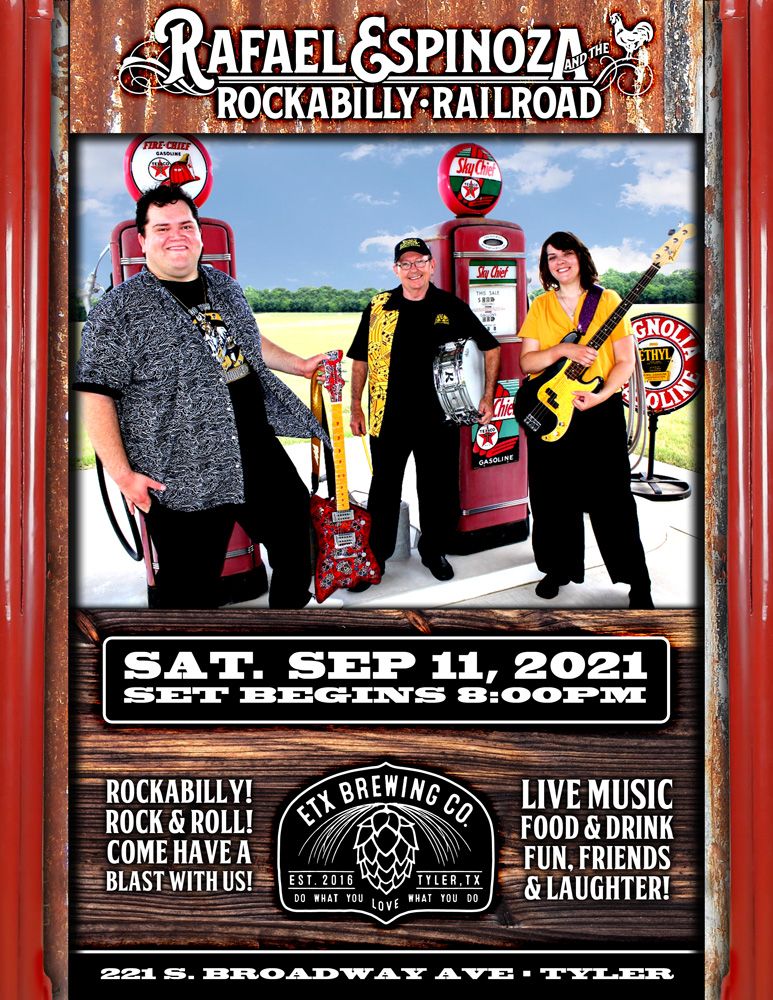 My grandfather Bill Miller Jr owned a fillin' station in Ada, OK in the Summer of 1969, and one day this famous man pulled up in a big black cadillac. He told my grandpa "I bet you don't know who I am..." And Grandpa replied "Hey Bo Diddley, I'm your biggest fan!" Grandpa couldn't believe his eyes that one of his favorite performers stopped at his place that day. He even filled up Bo's caddy with gas and checked his tires and sent him on his way to OKC to play that night. I wrote a song about this occasion and it appears on our new album that we recorded at The Legendary Sun Studio in Memphis, TN and we are excited for you to watch our video honoring this great memory of Bill & Bo!

Get your album copy with this song on Vinyl along with other merch at our website link below! Thanks! 🚂⚡🎸🎻🥁🏜🔥

Special Thanks to Bob Smith at Bob Smith Auto Sales for the 1949 Black Cadillac and Gary Hatfield & Dale Barnes at Hatfield Restorations for the Texaco Gas Station, and of course to Bill & Bo for the song inspiration! ❤❤ 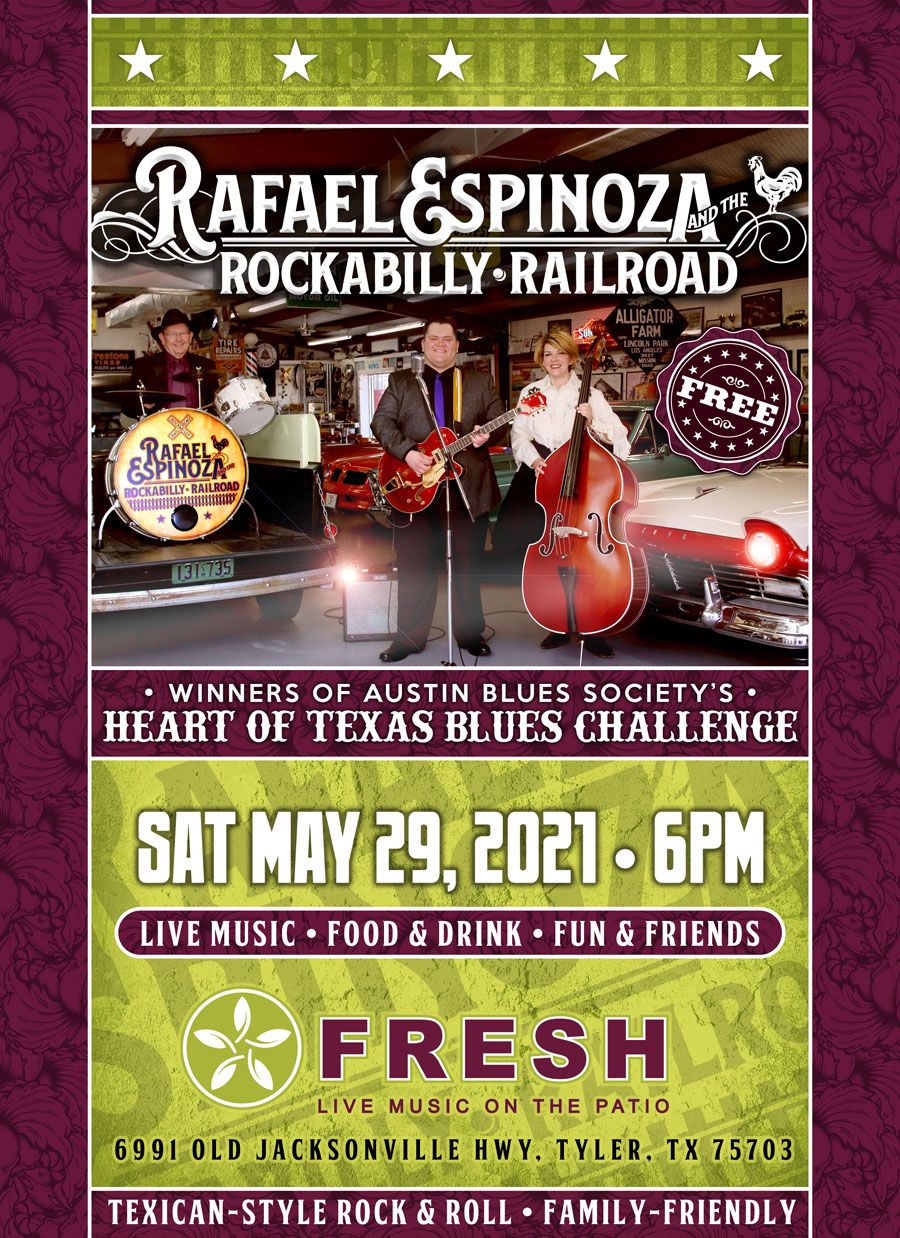 We are excited to announce that Rafael Espinoza and The Rockabilly Railroad have been invited to headline The 1st Annual Lake Hawkins Car Show in Hawkins, TX Sat. April. 17th, 2021 - 5:30pm!

Rafael Espinoza & The Rockabilly Railroad offer a wide variety of the Rock Spectrum! After all the word Rockabilly is a hybrid term that is meant to combine elements of Rock, Country & Blues! Bring the family & discover why this band won Austin Blues Society's Heart of Texas Blues Challenge at Antone's in Austin, TX!) 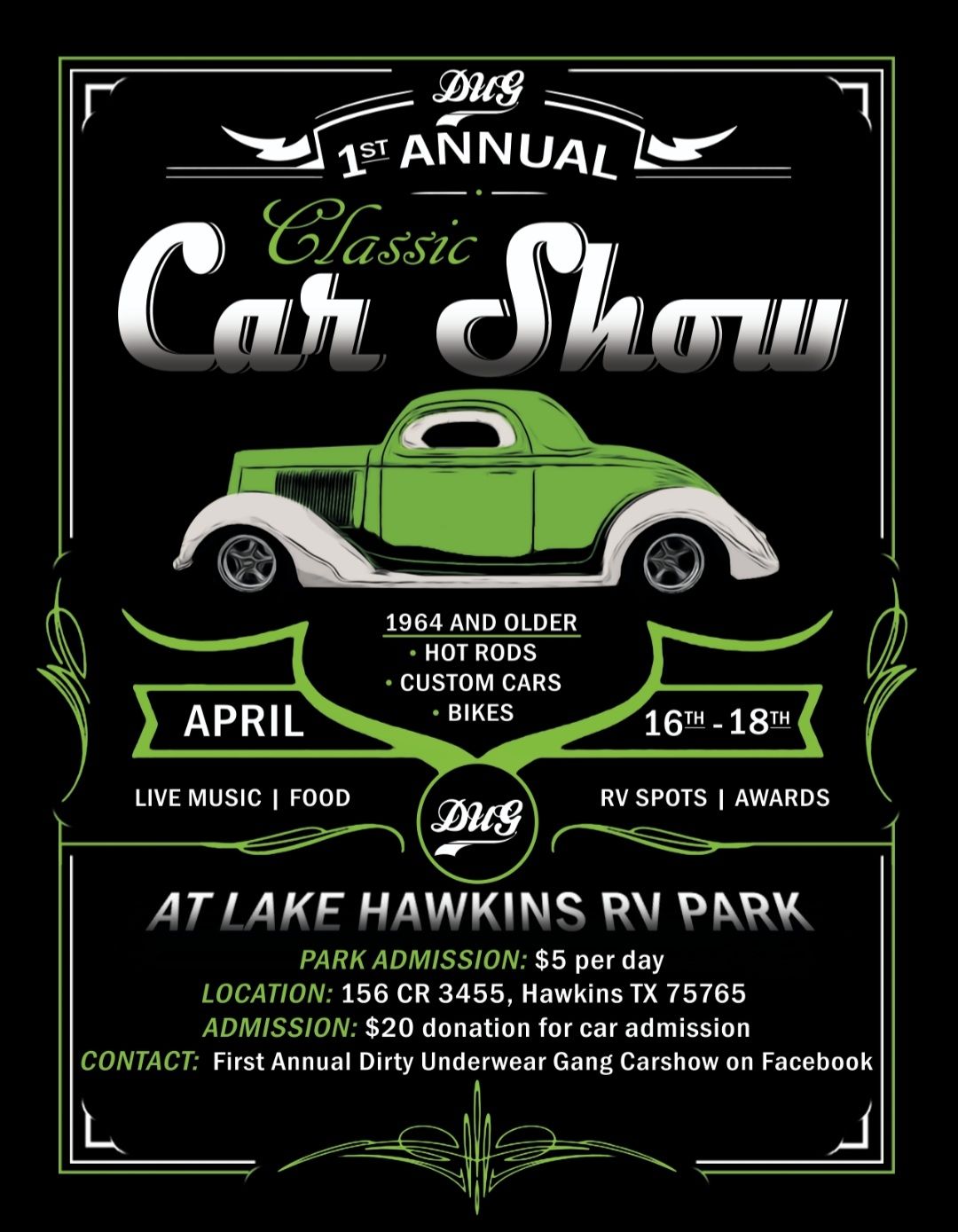 In support of "Bigfoot Meets Nature Fest" happening in Mineola, TX in the 2nd Weekend of October, Rafael was asked to write a song about Bigfoot!
Rafael was up for the challenge and wrote "The Bigfoot Boogie!"

Watch the video and purchase an mp3 of the song for only $0.99 at the link below...
www.rafaelespinozamusic.com/store

In this Interview Los Lonely Boys talk about Henry Garza's path back to a miraculous healing recovery after a recent stage injury and that with faith in The Good Lord above anything is possible.
The boys also talk about their recent works on a brand new album set to release very soon.
The three brothers from San Angelo, TX also take part in a Q&A series with San Angelo Native Lauren Lopez who is studying Journalism at Harvard University.

Find out more at The Official Rafael Espinoza Website at: http://www.rafaelespinozamusic.com

"Guero's In The Barrio" song belongs to Los Lonely Boys and is copyrighted by their music publisher.
The Song is available on their album entitled "FORGIVEN."

Their latest album release "ROCKPANGO" is available on iTunes at: http://bit.ly/Rockpango-iTunesLP and on Amazon at: http://amzn.to/gm6rBg.

Find out more at The Official Los Lonely Boys Website at: http://loslonelyboys.com.

FIRST ALBUM REVIEW BY ONE OF THE WORLD'S MOST RENOWNED GUITAR MASTERS AND SONG STORY TELLERS: WOODY MANN
"Just listened to the new recording "Golden"...A great set of originals from guitarist/singer,songwriter Rafael Espinoza. Beautiful soulful playing and singing that cover a wide range of moods and musical influences. From the swinging blues title track "It's All Gravy Baby" to the love ballad "Your Eyes Told Me", Rafael's originality and honesty come through as does his sheer enjoyment of the music. The trio arrangements create just the right groove for each tune - great playing. And...they all sound like they are having some fun!" - Woody Mann


The Debut Music Video for the song "GOLDEN"